Reach for the Stars!

4 Stars for The Close Hotel

Located on Long Street in Tetbury, alongside independent boutiques and quirky antique shops lies The Close Hotel. The team at The Close are celebrating this week after being recognised with a prestigious four stars by the AA. The addition of a fourth star to the hotel’s rating is a significant achievement for the team, almost four years after being acquired by Cotswold Inns and Hotels.

“We are delighted that our hard work and excellent standards have been further recognised. The entire team has worked extremely hard and this industry recognition is very well deserved.”

The announcement of the new four-star rating follows the annual AA inspection that took place at The Close Hotel in early 2017. In addition to four stars, The Close Hotel also achieved 2 rosettes for culinary excellence and a breakfast award. 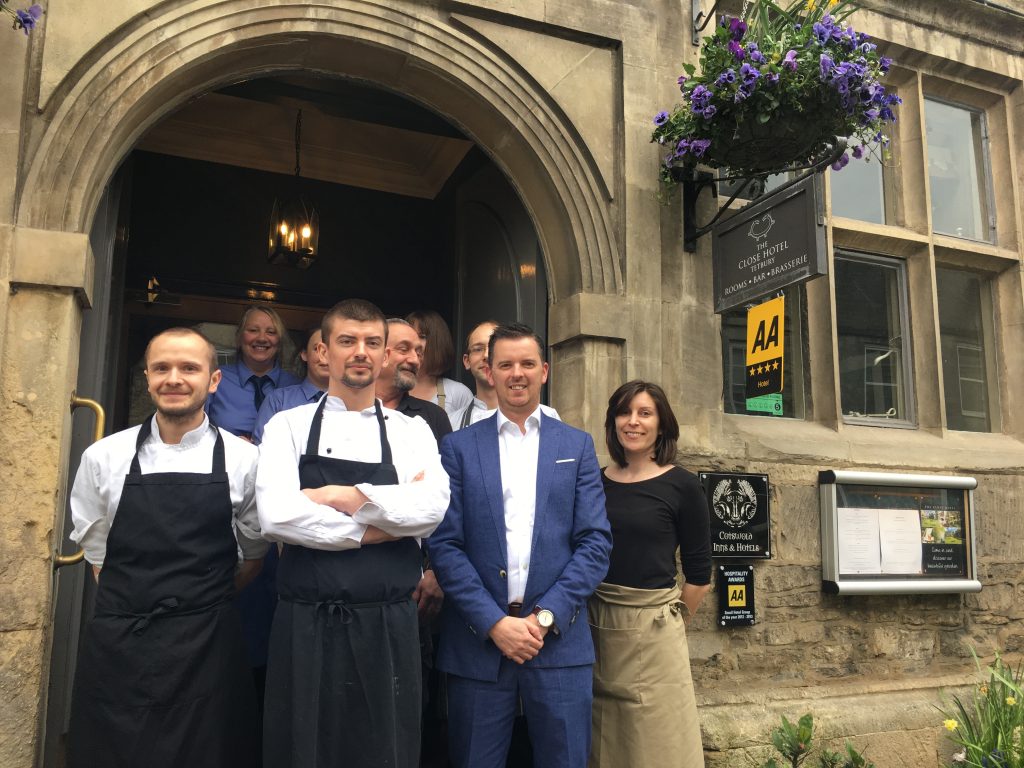 Sign up for our newsletter and we’ll send you the latest offers and information from Cotswold Inns and Hotels.

Welcome to Cotswold Inns and Hotels - a unique collection of charming places to stay; relaxing locations to gather and a good excuse of an indulgent bite to eat. Located within the quintessential beauty of The Cotswolds, find out more by clicking on the map.

Explore an ancient market town deep in the heart of The Cotswolds. Full of friendly locals and a few rural royals, Tetbury is home to the well-known Highgrove shop and a fabulous collection antique shops and boutiques that will inspire the eye. With the famous Westonbirt Arboretum just up the road, pull on your wellies and take an amble around 15,000 different types of trees from all over the globe.

Located on the rambling banks of the River Windrush, Burford is one of the much-loved treasures of The Cotswolds. Known for its quaint little shops and galleries nestled along the old high street; fall in love with its charm and become enchanted by its character with plenty to discover and explore during your visit.

Situated on the famous Roman Fosse Way, the market town of Moreton-in-Marsh is a treasure to The Cotswolds. Renowned for its historic charm dating back to the 13th century, it’s a favourite amongst boutique shoppers and antique hunters with a few enticing cafes along the way offering a taste of quintessential Britain. Amble around the buzzy market on Tuesdays or try your hand at falconry at Batsford Arboretum- there’s plenty to explore and discover.

Located in the picturesque Cotswold village of Bibury, famous for its grassy meadows, honey-coloured cottages and the River Coln that gently flows through the middle. It's no wonder William Morris called it 'the most beautiful village in England'. With plenty to explore and discover, the famous Bibury Trout Farm is definitely worth a visit during your stay at The Swan.

Nestled amongst The Cotswold wool towns, Stroud is known for its cafe culture, arts and crafts. Nicknamed the “Covent Garden of The Cotswolds” by Jasper Conran, the surrounding Cotswold Hills exhibits stunning views that stretch all the way to Wales. These have since inspired the work of the many artists who have come to live in the local area.